The Division of Small Business is now accepting the next round of EDGE Grant applications through September 30, 2022 at 4:30 p.m. Apply today! More Info 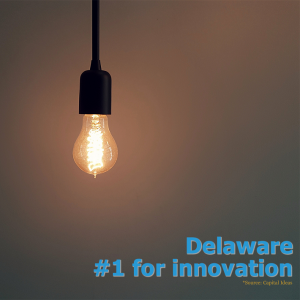 A recent report from American Funds ranks Delaware the #1 state in the US for innovation.

The report looked at the number of patents granted in each state from 2006 to 2015 and then divided that number by each state’s population. Delaware ranked #1 with more than 20 patents per each 1,000 residents.

One advantage for Delaware, the report noted, is the large number of companies incorporated here.

Click here to read the full report from American Funds.