EDGE out the competition with a grant of up to $25,000 (Entrepreneur) or $100,000 (STEM) for your small business! Apply today - applications accepted through September 30. More Info 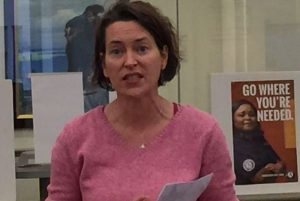 She shared the secrets of a winning campaign Wednesday as part of the Small Business Assistance workshop series presented by Delaware Libraries.

When people donate to your crowdfunding campaign it’s because they believe in you and your idea and not necessarily because of the perk you’re offering, said Igou, owner of Honey Bee Seasonal Kitchen & Market in Wilmington.

In crowdfunding, a small business owner raises money from other people to fund starting or expanding a business. Contributors are rewarded with some sort of perk.

Some of the people who contributed didn’t claim the perks they were entitled, she said. They were longtime customers who wanted to support the business and its mission of offering locally sourced foods, all of which comes from within a one-hour radius of Wilmington.

Still, selecting perks is an important aspect of running a crowdfunding campaign, a lesson Igou learned from her first crowdfunding effort when she was running the food-buying club that eventually grew into the kitchen and grocery store.

Making the perks too generous can eat into the proceeds.

In Igoe’s first crowdfunding campaign, contributors received 110 percent of the amount of their contribution in store credit, an amount she said was too expensive.

In Igou’s most recent campaign, she offered a variety of perks including the chance to participate in exclusive events, such as tours of a local farm, or a kombucha-making class.

Business owners might also consider offering perks that don’t cost anything, Igou said, such as the chance to select the paint color of a store, or name a new ice cream flavor.

Regardless of what the perks are, it’s important to send them to contributors as soon as the fundraising campaign is over, she said.

Here are some other takeaways from Wednesday’s session:

March 13: Incorporating a Business: The Why, What and How of Formation

March 27: The 5C’s of Credit: the impact on your financial success

The programs are presented simultaneously at the Bear, Dover, Georgetown, Milton and Wilmington public libraries.

For details, check out the calendar.

The Division of Small Business wants to help you start and grow your business in Delaware.