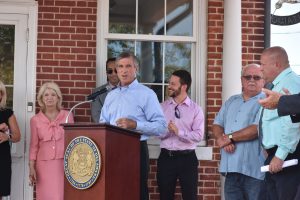 Gov. John Carney on Monday announced that Clayton, Delaware City, Middletown and New Castle have been designated Downtown Development Districts which is intended to encourage redevelopment by making property owners in those areas eligible for a rebate of up to 20 percent on what they spend for improving their properties.

Eight cities and towns in Delaware already participate in the program, which started in 2014. Rebates totaling $31.6 million have been awarded spurring $597 million in private investment. The Delaware State Housing Authority administers the program.

The additional cities and towns were selected based upon their revitalization plans and need for financial incentives.

“The Downtown Development Districts program is already bringing significant private investment to the eight currently designated cities and towns, and I am thrilled to welcome these four new designations to the program,” Gov. Carney said in a news release. “This expansion continues our commitment to revitalizing our downtown business districts and surrounding neighborhoods.”

The Division of Small Business wants to help you start and grow your business in Delaware.