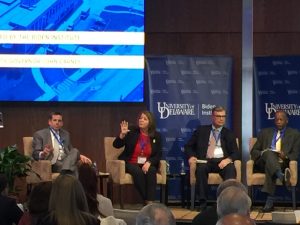 A conference Wednesday at the University of Delaware explored in depth Delaware’s 25 Opportunity Zones, including where they are located, how they work and how they can benefit both investors and communities.

These zones are located in each of Delaware’s three counties. They are low-income census tracts where, in order to encourage development, investor receive favorable tax treatment if they make a long-term investment in things such as new housing, existing or new businesses or industrial or commercial real estate.

Governor. John Carney, who was the keynote speaker at the conference presented by his office and UD’s Biden Institute, explained that the 25 zones are areas where the state wants to see additional economic development to improve those communities and create more jobs.

“We are committed to strengthening neighborhoods and communities across Delaware, which will help improve our economy, stabilize families, and make our state an even better place to live, work and visit,” Gov. Carney said. “The Delaware Opportunity Zone Summit highlights the options in Delaware for businesses and investors, and shines a light on our unique ability in Delaware to work quickly and collaboratively with government, business, and academic leaders to get results for the people of our state. Partnerships and community development investments in Delaware’s Opportunity Zones will help build on our ongoing community development efforts, and encourage additional private investment where it can have the most impact – in economically-distressed communities. Thank you to the Biden Institute, the University of Delaware, all of the panelists, speakers and attendees for your engagement at this important event.”

The locations of the zones match the state’s public policy objective of trying to encourage development in areas that have already been developed, such as abandoned industrial sites that could be cleaned up and become the home to new industrial development under revisions to the state’s Coastal Zone Act, Carney told the audience.

Some of the sites, such as downtown Wilmington, are in urban areas. Others, such as the ones in Seaford or Milford, are in more rural areas.

Some were once thriving industrial sites that are prime for redevelopment, such as the former Claymont Steel site  or the site in Newark that includes UD’s STAR campus that was formerly a Chrysler auto assembly plant.

Nationwide, about 8,700 Opportunity Zones have been designated under the Tax Cuts and Jobs Act, which was signed into law in 2017.

In Delaware, the Division of Small Business helped advise Gov. Carney about which census tracts should be designated as Opportunity Zones.

The Division’s Patty Cannon, who was a panelist at Wednesday’s conference, was part of the team that worked with the governor’s staff to narrow the list of 80 eligible census tracts to 25, which is the maximum each state can designate.

The Delaware Opportunity Zones page on the Division of Small Business website has a map showing the location of each of the 25 zones.

Contact the Division of Small Business with your questions about opportunities in Delaware’s 25 Opportunity Zones.